Desire to Gather: A Sermon on Luke 13

31 At that very hour some Pharisees came and said to him, ‘Get away from here, for Herod wants to kill you.’ 32He said to them, ‘Go and tell that fox for me,* “Listen, I am casting out demons and performing cures today and tomorrow, and on the third day I finish my work. 33Yet today, tomorrow, and the next day I must be on my way, because it is impossible for a prophet to be killed away from Jerusalem.” 34Jerusalem, Jerusalem, the city that kills the prophets and stones those who are sent to it! How often have I desired to gather your children together as a hen gathers her brood under her wings, and you were not willing! 35See, your house is left to you. And I tell you, you will not see me until the time comes when* you say, “Blessed is the one who comes in the name of the Lord.” ’ ~ Luke 13:31-35

The name is misleading: Sempervivum. Sempervivum, “always living.” Except they die. These plants that we often know by the name “Hens & Chicks” really only live for three seasons. Eternal life that’s not quite. The main succulent plant, the “hen” sends off ‘chicks’ loosely attached to the mother plant. Do you have these in your yard? But after three seasons, the ‘hen’ plant sends up a center stalk that blooms, and the plant dies. It can’t be stopped. Blooms and dies. And the baby chick plant lives on: Sempervivum. “How I have desired to gather your children as a hen gathers her brood.” Let us pray….

Jerusalem is not very far from here. Each week we creep closer. The arch of Lent, from quiet darkness of Ash Wednesday to the glaring parade of Palm Sunday moves us closer. “Jerusalem, Jerusalem, the city that kills the prophets.” Jerusalem, Jerusalem, the city feels like almost every time it is in the news there is conflict and strife. But it’s magnetic. It’s contested. It’s a draw to pilgrims and prophets.  It’s the center of the universe for the writer of Luke and Acts. Luke’s Gospel begins in Jerusalem, with Zechariah at the temple praying for descendants.  The boy child Jesus returns to Jerusalem to preach in the temple.  Later in Acts, Stephen and James will be martyred in Jerusalem. “All told, Luke mentions Jerusalem 90 times in his Gospel, while all the other New Testament writers combined mention it only 49 times. “ Jerusalem, the start of Jesus’ prophetic ministry; Jerusalem, the city that kills the prophets who have come before, and this one too… Back through the history of the Jewish people we learn in Deuteronomy 12:5, Jerusalem, after all, is “the place that the Lord your God will choose out of all your tribes as his habitation to put his name there” Jerusalem is thick with meaning, but fickle and unfaithful.  Attractive, magnetic, infuriating Jerusalem.

And there, in Jerusalem, before his time has come, Jesus is warned off by some of the Pharisees: Herod Antipas is gunning for you. But Jesus will have none of it. He knows his death is coming. He does not treat it as a separate event, but part and parcel of his ministry: today, tomorrow and the next day. He’s still got work to do, healing to accomplish.  He tells Herod the fox to buzz off.  Suddenly, Jesus’ defiant tone turns to mourning. “Jerusalem, Jerusalem, the city that kills the prophets and stones those who are sent to it. How often have I desired to gather your children as a hen gathers her brood under her wings and you are not willing.”

Maybe it’s anger. More likely it’s lament as Jesus sighs, “Oh Jerusalem, Jerusalem.” Barbara Brown Taylor writes, “If you have ever loved someone you could not protect, then you understand the depth of Jesus’ lament. All you can do is open your arms. You cannot make anyone walk into them. Meanwhile, this is the most vulnerable posture in the world –wings spread, breast exposed — but if you mean what you say, then this is how you stand.” How I have desired to gather you, says our God.

From May to September 2012, two Boston Globe reporters Meghan E. Irons and Akilah Johnson lived on Mount Ida Street in the Bowdoin-Geneva section of Dorchester. With other reporters, photographers, videographers and data visualization specialists, they attempted to understand this 68 block neighborhood with a murder rate four times the city average. Nate and Trina Davis have already had their youngest, their 14 year old son Nicholas shot dead a block from their house, when their eldest son was arrested for gun possession. Big Nate is tall, large. He’s lived in Bowdoin-Geneva for 40 years. Little Nate is reduced to a voice on the end of the phone line calling from jail. Little Nate was bound for college.  Unseen by their child, Big Nate and Trina stand in their dining room talking to a cordless phone, Trina still in her pink hospital scrubs. They stand with their arms open. How I desire to gather you.

Sometimes the streets of Jerusalem run through Bowdoin-Geneva. Sometimes they run through Weston as we long to gather. The invitation of Lent is to return to God’s open arms, to allow the Holy Comforter to gather up the broken bits of our lives. Jesus grieves not his impending death but the broken relationship with Jerusalem. The Jesus who wearily opens his arms to Jerusalem is the same Jesus who knows our grief as we try to gather up the scattered parts of our lives- a child led astray, a loved one who drinks, an unfaithful spouse, a broken relationship, bodies that will not do as we command. Jesus knows our love for the ones we can’t protect. How I have desired to gather you, says our God.

This is the story of our lives as people guided by Scripture. The story of Scripture is the story of God’s opening arms to a scattered people who are unwilling to be gathered. It’s not just others, we too resist being gathered in. We have many good excuses for staying separated from our God and one another: Our American exceptionalism. Our Yankee independence. Our town lines. Our sports rivalries. Our class divide. Our perceived self-sufficiency. Our denominational particularity. Our very full schedules. How often God desires to gather us and we scatter like chickens. Jesus prays that his followers may all be one, and we’ve created thousands of denominations. We can tell the story of the Church as a story of scattering chickens. But Scripture gives us our story of God’s steady desire and our tendency, generation after generation, to scatter. Lent is the season to examine the scattered bits of our life and place them before God.

Amid his grief over temperamental Jerusalem, Jesus chooses as delicious image to express his love: a chicken, or more accurately a hen. I fear I can’t say anything especially wise about chickens. I live in the city. The closest experience I have to chickens is when one of the neighbors seemed to have some illegal roosters for cock-fighting that started crowing before the hum of the MBTA busses and my alarm. We need our farmers to lead us here. But, we do not need to know much of anything about chickens to notice Jesus’ odd choice for this analogy.  To Herod’s coercive power like a fox, Jesus counters with the gender-bending, open winged image of a hen.

There was in fact a woman named ‘Mother Hen;” not of a fairy tale but on the path to sainthood in the Roman Catholic Church.  Venerable Mother Henriette DeLille was born in 1813 in New Orleans to a French father Jean-Baptiste Lille Sarpy and her mother, Marie-Josèphe “Pouponne” Díaz, who would have been called at the time “a free quadroon” or a ‘Creole of color.’ Mother Henriette was the child of their common-law marriage or ‘left-handed marriage,’ typical between wealthy white men and Creole women. Henriette grew up well educated, speaking French, attending quadroon balls, being groomed for the same arrangement. Yet, her faith was stronger than the social & familial expectations. When there was no religious life possible for women from her background, she founded the Roman Catholic order of the Sisters of the Holy Family in New Orleans, inviting in free women of color. When the Church would not gather these women, Mother Henriette took on the open armed posture of Christ, the mother hen.

Today, on the Mount of Olives, overlooking Jerusalem, there is a small church named “Dominus Flevit,” or translated from the Latin, “the Lord wept.” The 1950’s architect of the church shaped it like a teardrop. But beneath the contemporary church, the patch of earth where Jesus wept was also a Canaanite burial site and Byzantine monastery, and later on a 16th c mosque. Behind the contemporary altar, a window shows not some stained glass image of the New Jerusalem to come, but clear glass allows the worshippers to look upon that very same Jerusalem for whom Jesus wept. 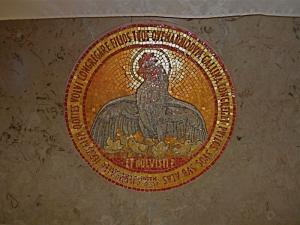 In front of the altar stands a mosaic of a hen with wings outstretched. The words from Luke ring the top of the Mosaic, “How I desired to gather you….” And even tucked under the feet of the hen and her chicks remain the words “et noluistis” (“and you would not”) in the pool of red under the chicks. Even still, the wings of the outstretched hen embrace the promise to gather even those who would scatter. That is the promise of Lent. May it you receive the invitation this day from Our God to gather again. Amen.