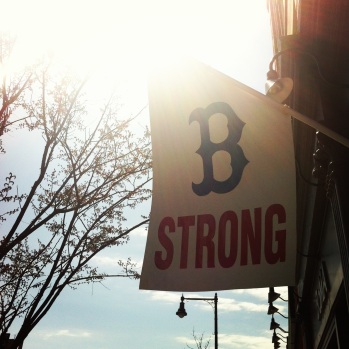 Silence and stillness are my reminders of the Boston Marathon bombing and aftermath. From the first train in the early morning to the last train at 12:30am, I can both hear and feel the rumble of the subway line from my apartment. The slight rattle of the dishes, the hum under my feet are the regular rhythms of life in my Boston. But during the manhunt for the suspected bombers, the city was placed on “lock-down” and the trains ceased to run. The buzz of the train stopped, and the silence was punctuated by the hovering of helicopters overhead. We we told to “shelter in place,” but nothing about our sheltering felt safe. It took months for me to stop twitching at the sound of helicopters above. The rhythm of the trains has returned. But every now and then, I become aware of the trains and pause to remember when they stopped.

Boston is a divided city, like most cities. We each experienced and re-experience the Boston Marathon bombing in a different way depending on where we live and move. I was in Gloucester on vacation for the week and immediately returned to my city to start working on the interfaith response. I didn’t experience the chaos at the bombing site. My experience of the Marathon bombing was mostly in the aftermath, the lockdown, the manhunt. Something entirely different happened for those present along the route and at the finish line. But because of the scale, many people sense that we experienced something together. Yet, at some point, the cheers shifted from away from the unified claim to “One Boston” to “Boston Strong.”

This past Friday night at St. John’s Missionary Baptist Church on Warren Street in Roxbury, I joined about 100 people, mostly from Boston’s predominantly black neighborhoods to pray for all those who have suffered violence in the year since the Boston Marathon bombing.  We prayed hard. We sang fiercely. The collection was taken up to pay for the funeral for a young man in the neighborhood who had just been killed. A Mother asked, “Where is our One Fund? Why does his death mean less than any other death? What is my son’s life worth?”

I was convicted. I was embarrassed by my own blindness. I was heartbroken. I didn’t hear jealously, but genuine wonder and grief of a mother who lost her son. For those of us who strive to follow Jesus who says that none are forgotten in God’s sight, how do we reconcile the invisibility of some lives with Jesus’s promise that God knows even the “number of hairs on your head” (Luke 12:7)?

The sinful truth is that in my beloved Boston, some lives are invisible. Jamarhl Crawford, creator of Blackstonian, said recently “when things that happen to white people, or things that happen to ‘white places‘ where violence is not supposed to occur is seen as this affront to everything that is sacred and holy.” Crawford speaks of the “regular violence,” a violence that becomes expected in “those places, to those people.” Part of what made the Marathon bombing so communally disruptive was that we don’t expect such violence on Boylston Street as we do on Bluehill Ave. Since the Boston Marathon, 235 people have been shot in Boston, 35 people senselessly killed in “those places, to those people.” How is that “Boston Strong?” I grieve the collective trauma, suffering and senseless deaths of the Boston Marathon. Yet how is 35 dead any less senseless? When we chant or buy “Boston Strong,” which Boston are we talking about? Boston is a divided city. Which Boston is strong?

Decades of Boston racial and economic history play into these divisions. As a nation, we have grown to tolerate violence to some people in some neighborhoods. We bring no healing, we do one another no good if we turn this into “oppression Olympics” or contests of who suffers more. I believe there is no cap on the amount of empathy we can expend. Many people suffered enormously during and following the Boston Marathon bombing. Some people suffered unseen, with far less sympathy and resources. And if we dig underneath, maybe we find a embarrassing presumption that we actually expect some people to suffer more because of where they live and the color of their skin. With a regularity that rumbles along like the subway lines, we take for granted that violence will always be a fact of life in some communities. We perpetuate the insidious logic of violence in our own hearts if we divide further as our fellow Bostonians suffer. 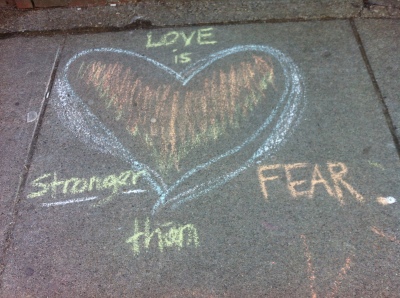 On the anniversary of Tuesday April 15, and the Marathon on Monday April 22, there will be many tributes. When you pause for a moment of silence, remember all who grieve the dead in Boston. Maybe learn the names of the dead (including the 19 people killed in Boston since January) and pray for their families too. Pray that the blindness might be removed from our eyes. Commit to walking in the Mother’s Day Walk for Peace on Sunday May 11.  Our divisions are deep, and the violence systemic and the work to overcome such division will probably take decades, but there is no possibility of healing if we cannot see one another.