6 Then he told this parable: “A man had a fig tree planted in his vineyard; and he came looking for fruit on it and found none. 7 So he said to the gardener, “See here! For three years I have come looking for fruit on this fig tree, and still I find none. Cut it down! Why should it be wasting the soil?’ 8 He replied, “Sir, let it alone for one more year, until I dig around it and put manure on it. 9 If it bears fruit next year, well and good; but if not, you can cut it down.’ ” ~ Luke 13: 6-9

from  US Poet Laureate’s Louise Glück’s 1992 poem: “Vespers [once I believed in you]” from her book, The Wild Iris.

Once I believed in you; I planted a fig tree.

of no summer. It was a test: if the tree lived,

it would mean you existed.

By this logic, you do not exist. Or you exist

in fervent Sicily and Mexico and California,

where are grown the unimaginable

they see your face in Sicily; here we barely see

the hem of your garment. I have to discipline myself

to share with John and Noah the tomato crop.

If there is justice in some other world, those

into lives of abstinence, should get

objects of hunger, greed being

praise of you. And no one praises

more intensely than I, with more

to sit at your right hand, if it exists, partaking

of the perishable, the immortal fig,

which does not travel.

Let us pray: Holy God, who invites all your people to life abundant again and again, guide the hearing and the preaching of your Scriptures, that we might hear the Word we need for this time, and these people, and in this particular place. I claim you again, my rock and my Redeemer, Amen.

I’ve tried to transport that “perishable, the immortal fig” of which Louise Glück speaks. Coming home from the Holy Land, I swaddled figs in paper towels, put them to bed in a plastic bag, and tucked them in to my carry-on luggage only to arrive back home in Boston with a sticky mess that at least had the decency to stay self-contained in the bag. I threw that sticky bag into the airport bathroom garbage bin, filled with dirty diapers and greasy brown burger bags. When that failed, we tried a different route. My Aunt Barbara had a bounty crop of figs in her Atlanta yard, more than any one home could consume. She lined each one up into two egg carton, two dozen bodies seated obediently like children on a bus, and sent them through the mail on a field trip to Massachusetts. The box arrived with a damp spot on one end, a sign of the crash I’d find inside. The immortal fig does not travel, but produces fruit where it is planted, sweet, tender unimaginably delicious fruit.

Except when it doesn’t. Or it won’t. Or it can’t. Here, in the Gospel of Luke, Jesus tells the parable of a barren fig tree. This fig tree has everything going for it: the right climate, enough water and sun, enough health to make it to three years old, even a hired hand, a gardener to care and tend it! But still no fruit.

The threat comes. “Cut it down! Why should it be wasting the soil?”

So often this parable has been read as a divine threat for productivity- get busy making fruit or the ax is at the roots. And that reading makes sense when you think of the context in which this was written, an oppressed people anxious to have judgment come. Apocalyptic literature is often written by those in such dire situations that liberation comes from the judgment against the oppressor. Chants of “Cut it down” rise from those who are tired of seeing the privileged fig tree get all the water, all the sunlight, all the soil and all the attention while others wilt, parched from lack of water and care. That’s one way to read this parable.

We could read this as a wrathful God and a benevolent Christ who stands in to advocate for one more chance for those deserving to be cut down. But that reading presumes we live in a binary world of blessing and judgment, good and evil, productive or barren, reward and punishment.  That is not the world I believe in, nor is it the God of second chances for whom grace is always greater than judgment. Parables are not made to be tidy metaphors; they describe more of what the Kingdom of God is like than they map easily onto us.

We have a messy metaphor here, dripping on our fingers, oozing off the edges of the page, bruised from travel across the generations and the mishandling by many. Jesus refuses to clean it up for us. We have to deal with the messy texts. A mature faith contends with it all.

This Merciful Gardener sees that the tree is not producing, but instead of cutting it down right now, advocates some additional care. “Let me loosen the soil,” he says. “Let me thrown down some manure,” he suggests. Let me get my hands dirty and work with this unproductive tree. The Merciful Gardner knows that things need time to grow to full maturity. A year. Just another year, he advocates. Not forever, but just another year. This is indeed a fig tree, not some mere ornamental, but a tree intended to produce fruit. 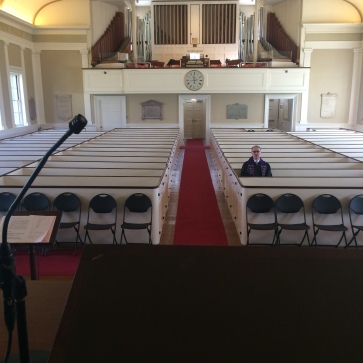 It’s a dangerous thing to tell a highflying, well-resourced church like First Parish Milton that God cares about our fruitfulness.

We can get seduced into thinking that love is conditional: if we only do more, have more, work more. We can get contorted in our beliefs that abundance is a sign of blessing and so, the inverse must also be true- scarcity is a sign of unworthiness. We can get distorted into thinking our worth is in proportion to our productivity. That is not God’s grace, but a cosmic vending machine, a spiritual transaction where I put in my work and God dispenses blessings. But hear me clear, our fruitfulness cannot earn God’s grace, and God is invested in our flourishing. Fig trees are created to produce figs. If we have been given rain, soil, sun, if we have been planted in fertile soil, we are expected to produce. Jesus has a few choice words for those who store up treasures or protect their inheritances.  Those who sit on their abundance and do not share it do not fare well in the economy of God.

Part of my ministry with the Massachusetts Council of Churches involves visiting congregations of all different denominations across the Commonwealth, listening to what God and God’s people are up to. Regardless of the size of the community or the beliefs of the congregation, this is true everywhere,: the churches that are thriving are deeply invested in the fruitfulness of their wider community.

They are not just tilling their own soil, but lending their tools and putting their hands to the plow with people they don’t know. They are digging up their neighbor’s fields and helping them plant. They are mortgaging their own fields to help others find their own fruitfulness. If I had a dollar for every congregation that told me they were welcoming, I would never have to fundraise again for the MCC.  Welcoming presumes people will walk in our doors and should they make it across the threshold, we promise to be nice to them. Many, many churches are “wasting the soil,” and indeed, in this era when culture will not prop up our walls any longer, the ax is at the root. But fruitfulness gets interested in the flourishing of others beyond our own field.

Where we are planted matters. I’ve tried to grow a great many things in our rocky New England soil and cold winters. I am fully convinced that the smell of a lemon blossom can raise the dead and restore me to life. But I’ve killed three different lemon trees trying to grow them here in New England. Fig trees are hard to grow in Vermont. Fruitful plants best grow where they are suited for the soil.

Where we are planted matters. You sit here in Milton, uniquely positioned and placed for the ministry that God has appointed to you, particularly to you. This soil is yours, rich with nutrients and possibility. What are you going to grow here for the good of others?

It is a rare church in this country whose neighborhood is the same as when that church was planted. We’ve all had to adapt to changing climates, changing winds. The churches that haven’t adapted are mighty uninteresting, and frighteningly insular. The Presbyterian scripture scholar Matt Skinner puts it this way “just because you haven’t been cut down, don’t presume you are bearing fruit.”

We confuse existing for fruitfulness. “We’re still here” is not a compelling mission.  But food enough for the journey and a fruitfulness not just for own sake, but so that all may flourish? That’s soil worth digging in.

There’s an urgency in Jesus’s parable. Just one year. I know churches with that urgency, but it’s mostly because of a fear that the money will run out. Urgency avoids the complacency of wasting the soil. But the urgency in God’s economy comes from a sense that so many are hungry for that life abundant that’s just out of reach. Our fruitfulness is not just for our own sake, but the sake of all who long for the food that truly nourishes, that perishable, immortal fig.

In an ancient farming manual, this practice becomes clearer. Fig trees were used to trellis grapes. In fact, Pliny the Elder, writing in his Natural History “recommends that trees be used for growing grape vines since “high class wines can only be produced from vines on trees ” Pliny specifically mentions the fig tree as a preferred tree for use m trellising ” The choicer wines,” he says, “are made from the grapes at the top of the trees.”

Maybe the fig tree’s fruitfulness mattered since the grapes depend on it too.

God’s grace, a grace that gives the fig tree another year to grow is not the same as indifference. God desires a fruitful tree because so many are so hungry for life abundant. And maybe others in this vineyard, in this neighborhood, in this neighboring Boston need your strong branches to trellis their vines.

Who needs the fruitfulness of First Parish Milton?